Doc Edge and "Art-Washing" Israeli Apartheid
Doc Edge 2022
Doc Edge runs an annual Documentary festival that covers three centers in New Zealand - Auckland Wellington and Christchurch. It receives funding from the Israeli Embassy for their event and it is often specificaly attached to one of the Israeli produced Documentaries ignoring the other 5 - 7 Israeli documentarties.

The Israeli government uses Cultural Events like the Doc Edge festival to "Art-Wash" Israeli abuses in the Occupied Palestinian Territories as well as the long running Apartheid they impose on Palestinians in Palestine/Israel. You can find a full description of the Legal Definition of Apartheid and the many reports detailing Israeli Apartheid here.

The Palestinian Campaign for the Academic and Cultural Boycott of Israel (PACBI) have called for Boycotts of such events here.

There are two issues around this event in 2022.
Israeli Sponsorship
Doc Edge has been receiving sponsorship from the Israeli Embassy in New Zealand on an annual basis for a number of years. See here for the Israeli embassy listed in the supporters.

In 2022, the documentary that they attached their support to is the Dead Sea Guardians (DSG). 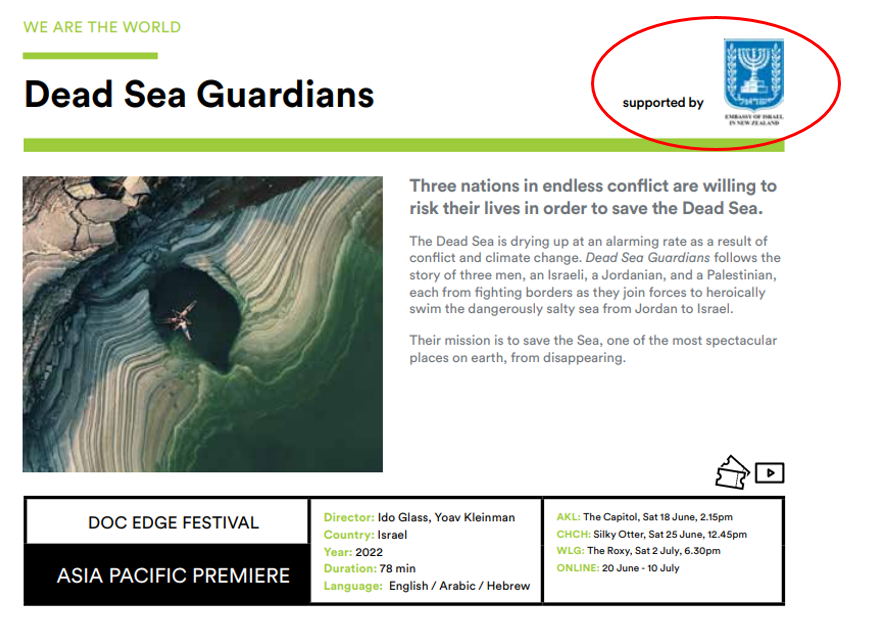 On investigating this documentary, after more than 40 Google searches, all I could find was this reference posted by the Dead Sae Guardians on their own Facebook page.

So the description of the route is - "An event that began at the Jordan Funnel and ended at the Kalihe beach. A total of 6 km".

When I investigated the route, Kalihe Beach came up on Google Maps as Kalia Beach in the Occupied Palestinian Territories and 6 Kilometers away from that is a canal running into Jordan (the Jordan Funnel).

The route described in the Doc Edge promotion said the swim was from Jordan to Israel. The only conclusion from the DSG post is that this documentaries promotion denied the existence of the Occupied Palestinian Territories. Or Wiping Palestine off the Map.

In an early morning search on Monday, I found a single 2016 article which talked about a different route which had the swim being 17 km long, over 7 hours, and ending in Ein Gedi in Israel.

"At dawn, the 25 swimmers left on boats from Ein Gedi on the Israeli side of the Dead Sea to Wadi Mujib on the Jordanian side. Then, wearing special protective masks and snorkels, the swimmers paddled through the thick waters in what turned into a 17-kilometer (11-mile) swim from Jordan to Israel".

These are the only two references I can find to the route of the Dead Sea Guardians swim. Contradictory references.

I therefore deleted my references on Facebook and Twitter to the swim as being from Jordan to the Occupied Palestinian Territories.

This is just a quick explanation as how my information was wrong. The mistake on the route was all mine.

PS - This has Nothing to do with Censorship as some people in the Pro-Israel Supporters groups have been trying to make out.

The protests outside the Dead Sea Guardians doco specifically, has always been because it has the Israeli Embassy Logo attached to its promotion. (see above)

My advice about the route was supplementary to protesting the Israeli Embassy using Doc Edge to Art Wash Israeli Land Theft, Ethnic Cleansing and Apartheid. 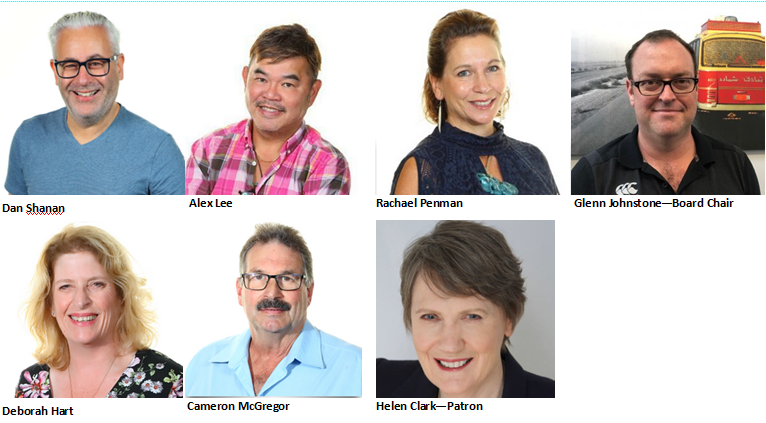 For a number of weeks, PSNA had been emailing the Executive Director of Doc Edge, Dan Shanan (see above), asking for a brief meeting to discuss the Doc Edge “Art-Washing” of Israeli Apartheid.

Having received no reply, John Minto (PSNA Chair) who was in Auckland, Neil Scott (Me - PSNA Secretary) and Mika from Students for Justice in Palestine dropped in for a visit. We knocked on the door and Rachel Penman (see above) pushed the door release button from inside and invited us in. She picked up her dog so it couldn’t escape. John patted it and Rachel said it only barks at trucks so not to worry. Smiles all round.

Rachel invited us to sit on a couch as she went to talk with Dan and arrange the brief meeting John had requested.

We waited for about 10 minutes, sitting on the couch and quietly chatting between us, but Dan Shanan was suddenly very busy on a loooong “Conference Call”. All the while people went in and out of his office. While we waited, the two, what looked like students, working in the open plan main office looked over and smiled at us from time to time.

Rachel came back and said Dan wouldn’t be available at all today. . . Or tomorrow. . . Or the next day. . . Etc. At this point, Rachel seemed a little nervous. Possibly because Dan had sent her out to tell us (lie to us?) that he was on that long conference call.

However, she said could make an appointment after 10 July and gave John her contact card. We asked for an assurance that they would respond if we sent her an email and she gave the assurance.

We left them the 35-page Executive Summary from the Amnesty International report on Israeli Apartheid "Israel’s Apartheid against Palestinians: Cruel system of domination and crime against humanity". Plus a sheet with the information on other reports outlining Israeli Apartheid with the PSNA Disappearing Palestine pamphlet attached. This is valuable reading for the Doc Edge organisers so they could get acquainted with Israeli racism and apartheid. We then left. We paused outside and took a couple of selfies with the Doc Edge logo in the background. 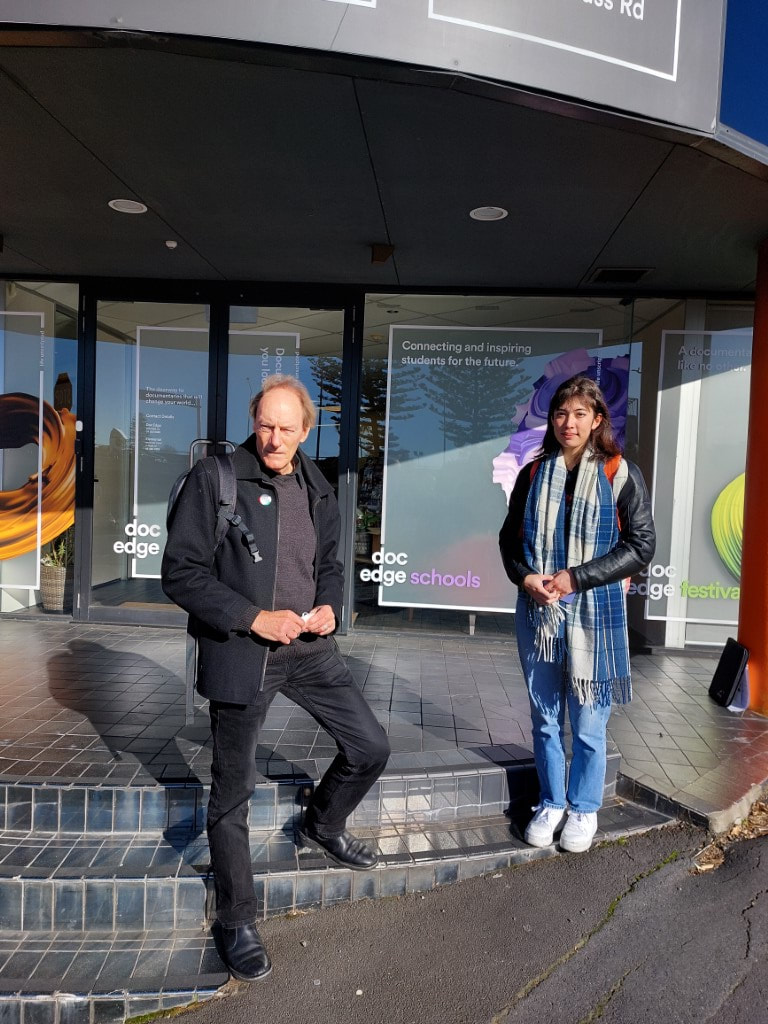 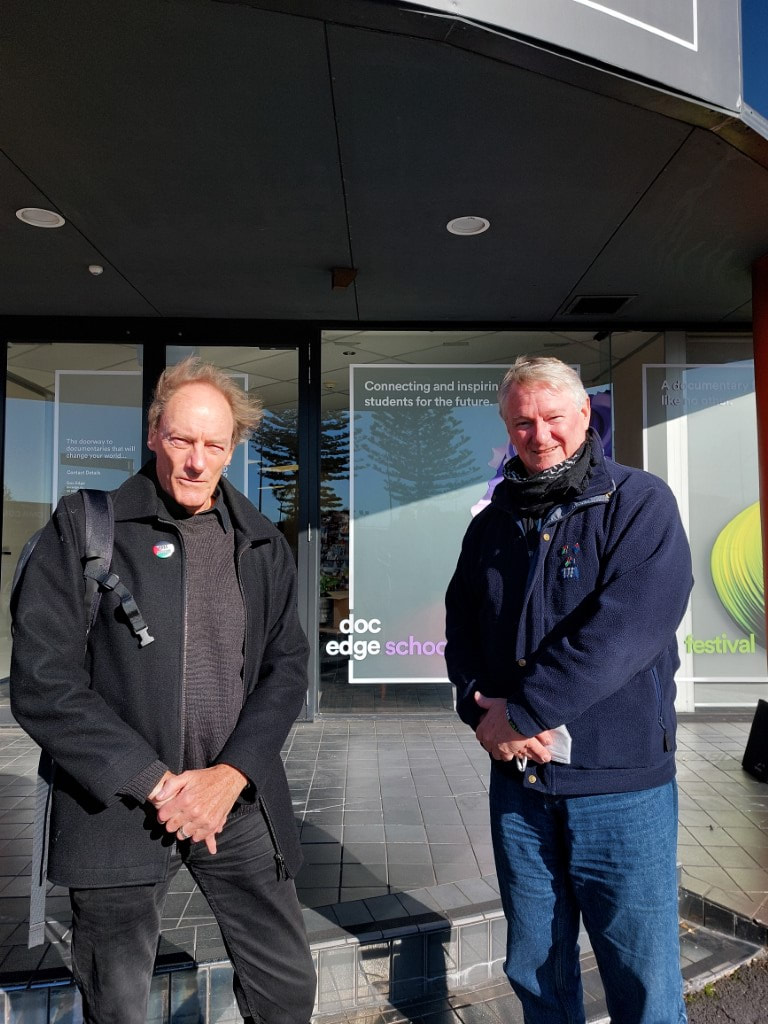 Twitter Attack
Needless to say a number of false smears of Bullying, Intimidation and filming of DocEdge staff have been made – all of it 100% false. But the truth has never stopped the pro-Israel lobby from trying to smear Human Rights activists.

As expected, someone within the Doc Edge offices must have got on the phone.

Sarah McMullan decided to tweet out about the "Bullying, Intimidation and Filming" she had "Heard" about. . .

I made the effort to reach out to Sarah asking  to meet and discuss what really happened.

Other people have questioned Sarah on her posts but she doesn't seem to be interested in discussing her posts with them either. 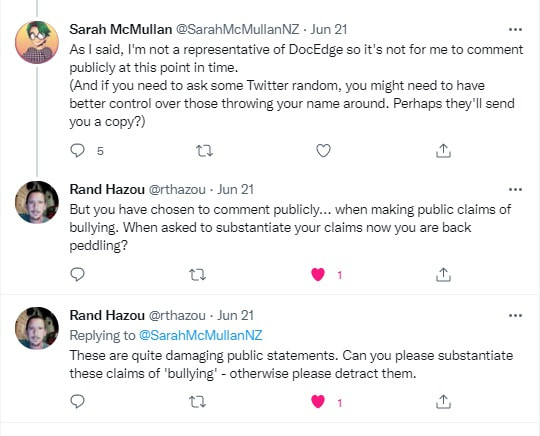 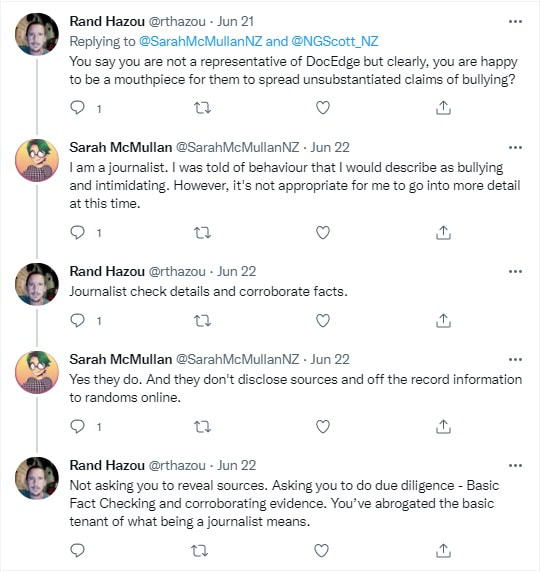 Lets make this clear. Sarah McMullan is a Journalist with a significant following. More than 4,250 on Twitter. Sarah writes for Radio New Zealand, Stuff and a number of other media outlets in New Zealand.

That is probably why she was approached by someone within Doc Edge to write the Smear piece.

And why she thought that her professional credentials would allow her to write her Smear without being questioned. And Sarah Must be aware that her potentially Defamatrory tweets will be used by the Pro Israel lobby sometimein the future.

After I reached out to Sarah asking to meet and discuss this issue, Sarah threatened action under the Harmfull Digital Communications Act (HDCA). Suggested that she was being Harrassed by being asked to justify her tweet.

In it, she would have read item 6 - "make a false allegation"

I am still willing to discuss exactly what happened on the day we visited the Doc Edge offices with Sarah.

I can only hope that Sarah returns to her Professional Journalistic roots and chooses to listen to the other side of this issue.

To not do so throws her whole Journalistic integrity into question.

If she is willing to promote a Falsehood here. . .