The Balfour Declaration of 1917 was one of the first agreements by the British and zionists agreeing to the development of a "National Home for the Jewish People" in Palestine.

It was a letter from Lord Balfour to Lord Rothschild.

The Essence is that one Man (an Englishman) promised another peoples land (the Palestinians) to another Group (the Jews). At the same time, he insisted that the rights of the Inhabitants were to be protected.

Any thinking person who thinks this through Knows that this was a Totally Immoral thing to do. Balfour had NO RIGHT to promise Jews the land of the Palestinians!

That means the British, from that day on, had a Moral Obligation to the people of Palestine to ensure their rights on their homes and lands.

A Moral Obligation that Britain has NEVER carried out!

Here is the Declaration:

I have much pleasure in conveying to you, on behalf of His Majesty's Government, the following declaration of sympathy with Jewish Zionist aspirations which has been submitted to, and approved by, the Cabinet.

"His Majesty's Government view with favour the establishment in Palestine of a national home for the Jewish people, and will use their best endeavours to facilitate the achievement of this object, it being clearly understood that nothing shall be done which may prejudice the civil and religious rights of existing non-Jewish communities in Palestine, or the rights and political status enjoyed by Jews in any other country."

I should be grateful if you would bring this declaration to the knowledge of the Zionist Federation. 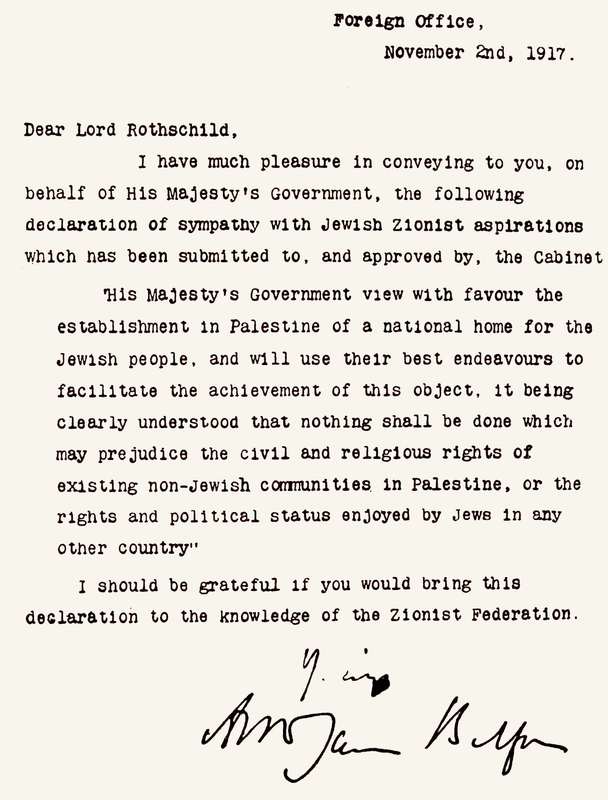