After tweeting that I had posted my response to Giraud's Litany of Lies here, I received the following reply from (probably) David Dumin of the IINZ.

"Thanks for submitting it."?

First, the fact is that I Never submitted this Reply to David Cumin at the IINZ. I posted it here.

David Cumin Never responded to my numerous requests to host my Reply!

So in this matter, David Cumin is simply Lying! Joining Giraud in writing Fantasy Fiction for zionism!

The second thing to consider is that Cumin's tweet says "your "short version" does not meet our minimum editorial standards". . .

As if any Right of Reply has to be agreed to by the Host for content/substance. That is the antithesis of Free Speech and Debate! It reminds me of Piggy Muldoon years ago when he demanded questions from Reporters 24 hours in advance and would only answer the ones he liked. . .

David Cumin, "Champion" of the Free Speech Coalition and a supposed supporter of Debate on Palestine/Israel, fails at this first hurdle!

In early November, Dane Giraud wrote an open letter to John Minto where he attacked John Minto and outlined his case that I, Neil Scott was an anti Semite and a Neo Nazi.

The background to this is that a week earlier, Giraud and I had a Twitter debate. During that debate, Giraud insisted (4 times) that I had Never read Benny Morris, a Jewish Historian. I proved that Giraud was Wrong (by providing screen shots of my Auckland Library reading record which showed that I had taken Morris’s books out 12 times over 13 years) and said he had Misrepresented me or Lied.

Instead of admitting his “mistake”, Giraud Blocked me.

In, what I can only assume to be a fit of Humiliation/Embarrassment leading to Anger on being Proven to have Lied, Giraud then wrote the Open Letter to John Minto and organised to have it hosted on the Israel Institute of New Zealand’s website by (I assume) David Cumin. Then he unblocked me and pushed his “Letter” at me in what I can only assume is his attempt at some kind of slap on the face.

For three weeks now, I have been asking Cumin to give me a Right of Reply to be hosted on the IINZ website but Cumin has ignored my request. So much for Cumin’s Free Speech Credentials and an oft call that Debate on Palestine/Israel is a good thing.

The second aspect to be aware of is that our Trio of NZ zionists have had a relatively unchallenged time in the media to push the zionist story in defence of the Racism, Terrorist and Apartheid of zionist Israel. Recently, the Palestine Solidarity Network Aotearoa has been more active which has drawn attacks from our Trio of zionists. These attacks are an attempt to silence the Voice of Palestinian Human Rights in New Zealand.

The third aspect to be aware of is that this Trio of NZ zionists have been attacking any New Zealand Politician or Human Rights Campaigner who advocates for Equal Human Rights for All in Palestine/Israel. Or just stands up for Palestinian Human Rights at all. Some of the people that have attacked are MP’s Duncan Webb, Golriz Ghahraman, Marama Davidson and Human Rights activists John Minto and myself.

In fact, they attacked the Ministry of Immigration for showing a map of Palestine. Where Palestinian refugees come from. . . and said that showing this map was “Wiping Israel off the Map”. Maybe this image tells us the truth: 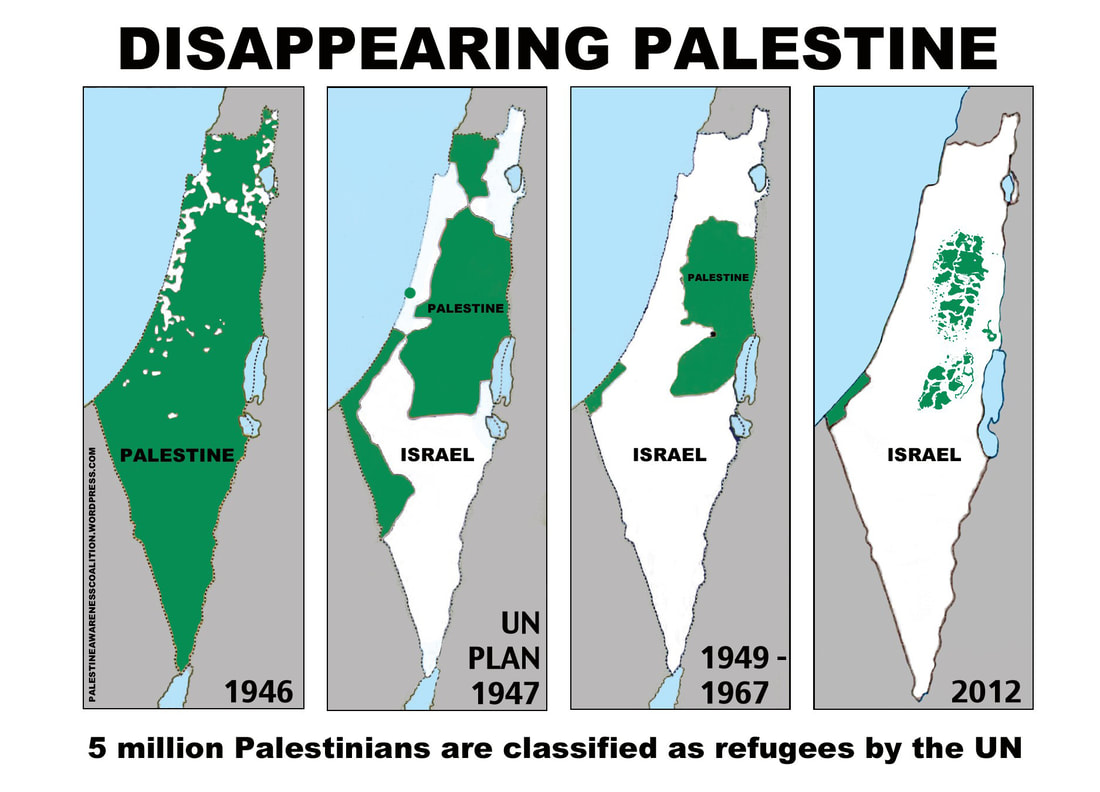 The Israel Institute of New Zealand, driven by NZ zionist Cumin, couldn’t be more of a mouthpiece for Israel if it tried. Look here for how it works to influence the Political agenda in New Zealand all in support of Racist, Terrorist, Apartheid zionist Israel.

The forth aspect to be aware of is that these attacks are Not confined to New Zealand. There has been a year’s long campaign to paint Jeremy Corbyn of the UK, a decades long fighter Against racism and anti-Semitism, as an anti-Semite. Then the attacks on US Politicians who have said that the Israeli Terrorism against the captive Palestinian must stop. These attacks and Smears are carried out in a concerted manner worldwide in defence of Israel’s actions. Look here for more information:
The current attacks on John Minto and myself were fully expected as the New Zealand Palestine Solidarity, formed in 2013, has been rejuvenated and renamed to be Palestine Solidarity Network Aotearoa – www.PSNA.nz

As I said above, PSNA is a lot more active now with regular newsletters, approaches to politicians, letters to editors, International speakers, and a raft of other initiatives.

This has led to the growing number of attacks and False accusations of Anti-Semitism by the Trio. Something that we have labelled “The Trick” after what Shulamat Aloni said. 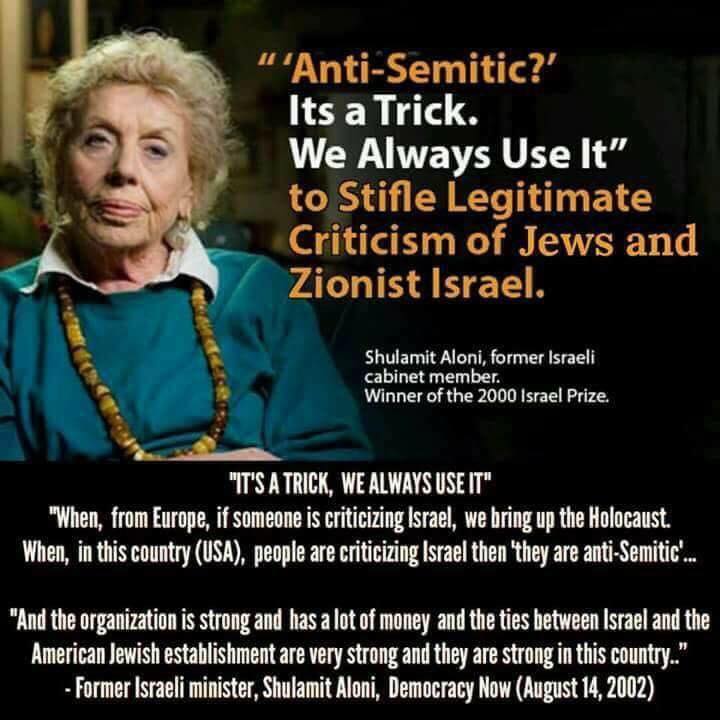 But we didn’t take one person’s word that False charges of anti Semitism are being used to stifle genuine debate. We took what the Author of the International Holocaust Remembrance Alliance’s Working Definition of anti Semitism, Kenneth Stern, has said about false charges of anti-Semitism – “it was being employed in an attempt to restrict academic freedom and punish political speech”

Back to Giraud
When you drill down to the core of Giraud’s argument, you can interpret it to be that Any Criticism of any of the Trio of New Zealand Zionists (David Cumin, Rob Berg and Juliet Moses who all have climbed onto a Political stage to defend zionist Israel from criticism is anti-Semitic. More in the long version of my response to come. And that by criticising any one of them (as I regularly do for their support of zionism with its Core of Racism, Terrorism, Land Theft, Ethnic Cleansing and Apartheid) you are criticising the New Zealand Jewish Community as a whole.

This is obviously Untrue.

When you read the Tweets that Giraud supplies, you will see that I am criticising one (or more) Individual of the Trio or New Zealand Politicians who have shown a Bias towards Israel at the expense of Palestinian Human Rights in the Occupied Territories.

Giraud tries to deny that some of National’s Politicians are Not backing Racist, Terrorist, Apartheid Israel even though the facts speak for themselves. In 2018, the Parliamentary Friends of Israel group was Officially rolled into the Africa/Middle East Friendship group. Later in 2018, an unofficial Israel Friendship group was resurrected as a Non Parliamentary group but as an exclusive National Party membership group. . . https://1.org.nz/nz-parliamentary-friendship-group-with-israel-launched/ 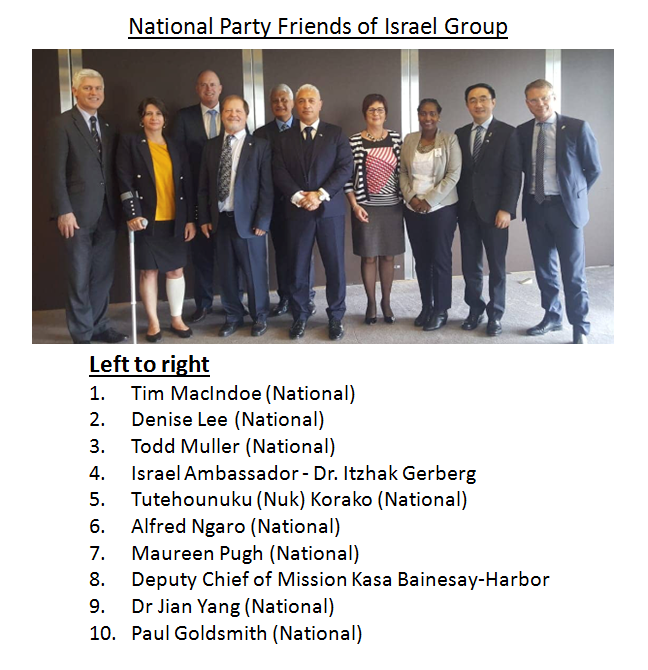 So Giraud’s False charges have been developed for these reasons (as if it could habe been written in Tel Aviv):
This is the Short version.

A full response will be able to be seen soon.